Review: The Power of Teachable Moments 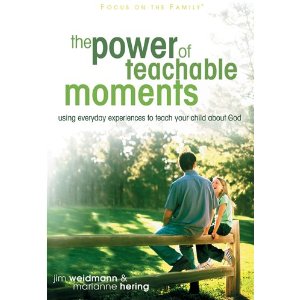 When I first picked up The Power of Teachable Moments by Jim Weidmann and Marianne Hering, I anticipated a quick browse would confirm that it really had nothing to offer me.  What a surprise when I was fully engrossed before the end of the first page!  I laughed aloud as one of the authors, candidly described the chaos in her household that followed having twins.  Mrs. Hering felt very out of touch with her daughter during those critical teenage years, and that is what motivated her be purposeful in her use of “teachable moments.”

Teachable moments is an incredibly versatile strategy because it can be used with children of any age.  Requiring no lesson plans, manuals, special knowledge, or preparation time, it is easy to implement and is suitable for families with busy schedules because it just takes a few minutes.  Although the book’s target audience is parents, this strategy would work beautifully for grandparents or anyone else who has a special relationship with a child.


What is a “teachable moment”?  Many of us think of a crisis when we hear that phrase.  The authors define it as a moment when something occurs that affords an opportunity to impart a spiritual truth.  To be successful, a teachable moment requires three components:  a satisfactory relationship with the child, the catalyst (which may occur spontaneously or be parent-orchestrated), and Biblical truth.  Examples of catalysts may be watching a movie together, a question posed by the child, seeing a spider, or making a wrong turn while driving.

This book opened my eyes to everyday occurrences that can be meaningful opportunities for spiritual training.  Filled with stories from real parents and children who share successful and unsuccessful teachable moments, the book was unexpectedly entertaining.  As I read, I felt as though someone was coming alongside me and mentoring me in how to spontaneously teach my child about God and His ways.

At the end of the book, the authors have included “101 Common Opportunities for Uncommon Teaching.”  These opportunities include noticing a butterfly, seeing a military uniform, being stuck in traffic, relying on a flashlight during a power outage or camping trip, celebrating a birthday, enjoying watching a baby, feelings of inadequacy, or observing your child share or make a personal sacrifice.  The 101 Common Opportunities, as well as examples throughout the text, leave the reader well equipped for creating their own teachable moments.

-Reprinted from Faith Networks newsletter in 2011
Posted by Stacey at 1:34 PM

Email ThisBlogThis!Share to TwitterShare to FacebookShare to Pinterest
Labels: Review